Welcome ›
Discover Bulgaria › Customs and traditions › Customs › Winter customs › November 30th – St. Andrew the First Called (Andreevden)
News
Balkansko is in Plovdiv!
We are delighted to inform you that we have just opened our 4th Balkansko shop in the most artistic city of Bulgaria – Plovdiv. The shop is located at ...
Read More
Photographic exhibition “Bulgaria Through My Eyes”
The photographic exhibition from 14 March 2014 to 28 March 2014. In the “Great Art Hall” of Radio Varna took place the photographic exhibi ...
Read More
Customs and traditions 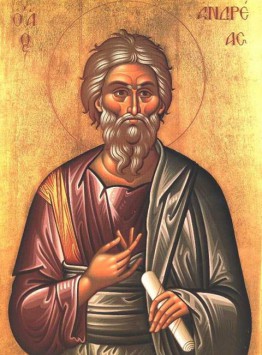 This day is dedicated to St. Andrew. He is the first among the twelve disciples who were told to follow Jesus Christ.

People believe this day is Bear’s Day – it’s celebrated in bear’s honour. It’s also called Edray, Edreay’s Day. According to the legend in the past St. Andrew was a lonely hermit in the mountains. There was taking care of small piece of land. But a bear ate his ox. Angered landowner caught the beast, put it to the yoke instead of the ox and in this way brought the animal under his sway. From then on he was riding the bear and worked the fields with its help. That’s why the saint is honoured as the patron of bears and their protector.

According to beliefs early in the morning corn is boiled into caldron, but soaked from the night before, while boiling it has to be thrown three times into chimney with exclamation: ” Here, bear, boiled corn, not to eat the raw and not to eat people’s food and men!”. In the caldron with corn they put also millet, beans, lettuce, barley, hemp. It has to be done in order everything that is planted and sowed to sprout and grow.

It’s been believed that from this day on the day becomes longer.

On this day wheat is cleaned for the water-mill. In Teteven area young brides do not work in order to become “bigger” – to become pregnant.