Welcome ›
Discover Bulgaria › Customs and traditions › Customs › Winter customs › Mummers (from January 1st to March)
News
Balkansko is in Plovdiv!
We are delighted to inform you that we have just opened our 4th Balkansko shop in the most artistic city of Bulgaria – Plovdiv. The shop is located at ...
Read More
Photographic exhibition “Bulgaria Through My Eyes”
The photographic exhibition from 14 March 2014 to 28 March 2014. In the “Great Art Hall” of Radio Varna took place the photographic exhibi ...
Read More
Customs and traditions 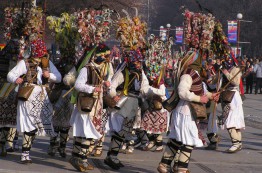 One of the most flamboyant and interesting moments in the Bulgarian traditional calendar are the mummers’ games – mummeries. They start on the first Sunday before Lent or on Clean Monday, called Mummers’ Day, and continue until St. Theodore’s Day.

In the Mummers’ games participate all bachelors and young married men. Before the beginning of the games they gather together, distribute the roles among themselves and divide into groups, each with a strictly defined character, special costumes and props. The leader of the group is called a mummer, a pilgrim. The lads with more gentle faces are dressed like young brides. Other masked characters are the soldiers, who carry a chain with which they catch people and make them pay their taxes. The “plyufkachi” have their faces painted black and put a leather patch of leather on top of their heads to look bald. The rest of the participants in the procession are the mummers, dressed in fur coats turned inside out. Around the waist they tie belts with cowbells and a bell. A part of the mummers’ procession is a large effigy covered with rugs and bells, carried by two people inside it. It is called a camel, a horse, a stag, a donkey. Other characters in the mummers’ party are a king and queen, a bear-trainer with a bear, a godfather and a godmother, a priest, a doctor, a tax collector. Together with the party go the musicians.

The mummers’ ceremony contains two major rituals. The first one is going from house to house in the village with wishes for health, fertility and luck. In every yard the mummers perform different comic situations often with phallic symbolism. The second important part in the mummers’ games is the ritual ploughing and sowing performed in the village square where all the villagers have gathered.

The mummers’ games end with a ritual bathing of the participants in the river. After that they dance a joint horo in the square. In the past there was a strong belief that if the mummers do not play in the village, the year would be dry, ill, and the harvest would be poor.