Welcome ›
Discover Bulgaria › Customs and traditions › Customs › Winter customs › January 1st – St. Basil’s Day
News
Balkansko is in Plovdiv!
We are delighted to inform you that we have just opened our 4th Balkansko shop in the most artistic city of Bulgaria – Plovdiv. The shop is located at ...
Read More
Photographic exhibition “Bulgaria Through My Eyes”
The photographic exhibition from 14 March 2014 to 28 March 2014. In the “Great Art Hall” of Radio Varna took place the photographic exhibi ...
Read More
Customs and traditions 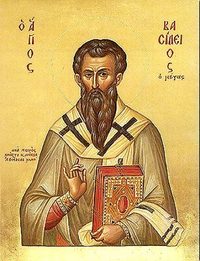 On this day people celebrate St. Basil’s Day, Vassilitsa or Survaki, marking the beginning of the new solar year which makes it suitable for making different forecasts about the weather, the health of the family members and other rites. Traditionally the supper is rich and abundant in meat dishes. Special ritual round bread, which is called “pogacha” or “pita”, is kneaded on this day and the custom is to put a silver coin in it. The eldest at the table breaks the bread and gives pieces to all people present, starting with the oldest in the house. The lucky one who gets the coin is believed to be healthy and prosperous during the year. Another custom on this day is for the unmarried maidens and lads to put the first bite under their pillows so the one they dream about that night will be the one they marry.

Another tradition on this day is for the family to gather around the fire after supper and foretell future events and achievements. Each member of the family puts some cornel-tree twigs in the fireplace and the one whose cracks first is believed to be healthy during the year. A widely spread ceremony on this day is “survakane” (slapping with a specially arranged and decorated stick made of a branch of cornel-tree). Loved by everyone and traditional for the country, it starts when the first roosters sing. It is believed that through the touch of a freshly picked twig one can ensure health and rich harvest.

Traditionally, on January 1st a mummers’ fair is organized. Young and old dressed in national costumes, disguise themselves and start chasing away the evil spirits. The mummers’ games and rituals are performed only by men, mainly by bachelors.