Welcome ›
Discover Bulgaria › Customs and traditions › Customs › Winter customs › December 6th – St. Nicholas (Nikulden)
News
Balkansko is in Plovdiv!
We are delighted to inform you that we have just opened our 4th Balkansko shop in the most artistic city of Bulgaria – Plovdiv. The shop is located at ...
Read More
Photographic exhibition “Bulgaria Through My Eyes”
The photographic exhibition from 14 March 2014 to 28 March 2014. In the “Great Art Hall” of Radio Varna took place the photographic exhibi ...
Read More
Customs and traditions 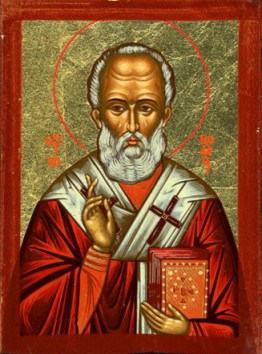 According to the Bulgarian cult to St. Nicholas, he is also regarded as a patron of the family and kin, a guardian of the home, the property, the articles of trade, the clan.

According to the Bulgarian Orthodox faith Saint Nicholas, whose name means “Winning”, is honored as a patron of fishermen. The folk religious myth of the division of the world has it that he was given the seas, the rivers and the lakes. He is the Master of the whole underwater world – of fish and water demons.

People’s images of the “wet St. Nicholas” or “the fish Saint” are various. He is represented as a winged lad with unusual physical strength. He flies with his golden wings over seas and oceans and enters fierce battles against water demons. On other occasions he is called old, winter St. Nicholas and is described as a white-haired and white-bearded old man. Christian iconography also represents him as an old man.

An obligatory element of the customs on this day is the preparation of fish whose body is covered with scales. Usually carp is preferred because according to the beliefs the carp is “a servant of St. Nicholas”. “.

In the folklore St. Nicholas brings the first snow – he shakes his long white beard and the first snowflakes fall from it. As the saying goes: “Today is his day, tomorrow comes his snow”. On St. Nicholas’s feast day people make predictions about the weather and the future harvest.