Welcome ›
Discover Bulgaria › Customs and traditions › Customs › Winter customs › December 4th – St. Barbara
News
Balkansko is in Plovdiv!
We are delighted to inform you that we have just opened our 4th Balkansko shop in the most artistic city of Bulgaria – Plovdiv. The shop is located at ...
Read More
Photographic exhibition “Bulgaria Through My Eyes”
The photographic exhibition from 14 March 2014 to 28 March 2014. In the “Great Art Hall” of Radio Varna took place the photographic exhibi ...
Read More
Customs and traditions 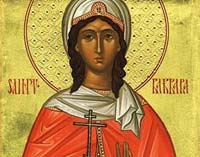 On 4th of December Varvara, Vyara, Varadin are celebrating name-day.

When the father found out that his daughter had become a Christian he gave an order to torture her and received the Martian city keeper’s agreement to convict her to death. By her father’s order Varvara is decapitated. The belief tells that God’s retribution reaches the father and the city keeper – they both were thunderstrucked by lightning.

In our country this holy-day is celebrated by combining pagan and Christian customs.

In some regions St. Varvara is considered as protector of children from diseases, especially from measles, and people called her “Grandma Measles”.

In Dobrudzha, in the evening before, a festive table in Grandma Measles’s honour is prepared. They put bowl with honey, honey cake, bowl with water and towel. In West of Bulgaria, children start a fire on a crossroad and cook lettuce on it. Then they jump over the fire three times and take a firebrand. Then the lettuce and the firebrand are been kept as a medicine for measles.

Other custom is to boil beans and to put several grains on a child’s knee and the kid has to eat them without using its hands.

In other regions St. Varvara is honoured as protector of poultry. This has also been called Woman’s Christmas because girls wear new clothes, go around houses and sing songs for good will and luck.

According to another tradition on this day they do a fortune-telling – which girl which young man will marry.