Welcome ›
Discover Bulgaria › Customs and traditions › Customs › Spring customs › March 1st – Baba Marta (Grandmother March)
News
Balkansko is in Plovdiv!
We are delighted to inform you that we have just opened our 4th Balkansko shop in the most artistic city of Bulgaria – Plovdiv. The shop is located at ...
Read More
Photographic exhibition “Bulgaria Through My Eyes”
The photographic exhibition from 14 March 2014 to 28 March 2014. In the “Great Art Hall” of Radio Varna took place the photographic exhibi ...
Read More
Customs and traditions 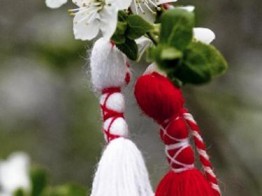 In folk beliefs March is associated with the feminine qualities for fertility which is reflected by the female name of the month. All customs and rituals in this month are related to the idea of the revival of nature.

Everyone meets he first day of March with joy. It is called Baba Marta, Parva Marta, Letnik. According to old folk tales and legends Baba Marta is a mythical female character which personifies the spring and the whole month. She is a hunchbacked old woman, wearing a fur coat, old clothes and a brown kerchief. The old woman quickly changed her mood – at one moment she was kind and smiling, at another she was gloomy and angry.

According to beliefs, Baba Marta is an old woman with a changing temper – when she smiles the sun shines, when she is angry the earth freezes with cold.

One of the most interesting Bulgarian customs for health is the crafting and adorning with martenitsi, also known as marta, martenitsa, mertenichka, kichilka, gadalushka. The martenitsi are usually made of white and red woolen or cotton yarn, rarely of silk, linen or hemp. People tie them on the children’s right wrists, on their necks, on the girls’ plaits, even on old women’s distaffs. With martenitsi are adorned young wives, old women, and sometimes bachelors, who wear them on their waists under the sash or in the underwear. Young fruit trees are also decorated, as well as the newborn lambs, calves and foals.