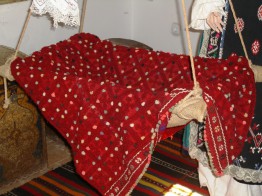 Rites and Rituals in Childbearing

The rites and traditions observed during pregnancy have a preventive and protective character. Those rituals define the behavior of the pregnant woman and the attitude of her relations toward her, in order to maintain the normal progress of her pregnancy and provide for the birth of a healthy baby.

Until the late 1930s, it was considered suitable for he bride to get pregnant within the first year after marriage.

Childless couples were believed to be cursed or punished for their sins, whereas most usually sterility was attributed to the woman.

There are a number of rules which the pregnant woman is obliged to comply with so that she will have a healthy pregnancy. A typical and widespread is the belief that pregnant women shall by no means kill the snakes they come across in the field because otherwise the umbilical cord will tighten up around the fetus’s neck and suffocate it. There is a rule with the same meaning forbidding jumping over rope, chain, strap, etc. According to traditional belief, a pregnant woman shall not sit at the threshold, at the shaft of a cart, or with her legs crossed.

There are a great number of rules without a logical purpose, but which are simply followed by tradition. For instance, a pregnant woman shall not steal or snatch anything in secret, even in order to satisfy her craving, because the mark of the stolen object will show on the skin of the newborn baby. Women would often discuss or predict the baby’s sex. They tried to guess by the face and the belly of the pregnant woman. The other traditional method for prediction of the unborn baby’s sex was by sprinkling salt over the pregnant woman’s head without her noticing. Then she must be carefully watched to see which part of her own body she would touch first. If she touches herself below the waist, a baby girl will be born, if she touches herself above the waist or on her nose, she will bear a baby boy.

Those rituals are only meant for the female members of the family, while the main part in them is played by the midwife or “wise woman”. The midwife which helps in childbirth shall be an elderly woman, not have a living husband, and of non-reproductive age. She shall have a rich experienced and be well familiar with the pregnant woman.

The young mother is also known as rodilya, lehussa, while the process of child birth is also called labor, giving birth/labor, delivery.

According to traditional belief, in order to have an easy birth pregnant women shall not celebrate certain calendar holidays, and pregnant brides shall not wear welts on their stockings and laces on their shoes on their wedding day.

From the very moment of delivery, the child receives great care and attention, so that he or she will be healthy and his or her life will be happy. The midwife would tie the baby’s umbilical cord with a thread (not black), and sometimes with a bunch of the baby mother’s hair. The umbilical cord was cut by a sickle, most often by the sickle the father used for reaping corn, so that “the child would be hard-working”. The baby is first swaddled in one of the father’s shirts.

On the 40-th day after the birth, the young mother goes to the priest for a purifying prayer and then she is relieved of her special status and is no more regarded “unclean”.

It was believed that the time of delivery was indicative of the child’s fate. The babies born in the morning are often more nimble and energetic, while those born on a new moon or on a full moon are generally happier. The day of the week also has its significance for birth giving. It is considered best for the child to be born on a good day, like on Monday or Wednesday. Tuesday is considered the worst of all weekdays. Babies born on Saturday will be able to see evil spirits that other people will not see.

A widespread belief is that the place where the umbilical cord stump is thrown will predestine the profession of the child.

The birth cycle is closed by kneading a round loaf without decorations. The round loaf is not decorated (or “dappled”) so that the child will not catch the measles. Everybody present on the delivery ritual shall eat from the round loaf in confirmation of the belief that Mother Marry is present on each childbirth and helps the young mother and the baby. After kneading and eating the round loaf, Mother Mary would leave.