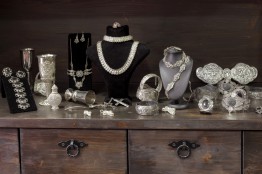 The working of precious metals and their alloys has millennial traditions on the rich in ore deposits Bulgarian lands. The well preserved works of Thracian goldsmith’s trade bear the marks of high-level artistic and technological mastery. Along with the basic techniques of casting and hammering, Thracian goldsmiths have worked filigree already in the 5th century B.C. – one of the most difficult goldsmith techniques.

During the 10th century goldsmith’s trade is considered an independent craft in the Bulgarian cities. After the 12th century there are accounts of rural goldsmiths as well. Since then starts the specialization of goldsmiths in various goldsmithing techniques: casting, forging and hammering, engraving, hemstitch, filigree, granulation, enamel, fitting of precious, semiprecious stones, amber a.o.

The art of goldsmith’s trade does not decline during the five centuries of Ottoman Turks’ rule. The masters in the old medieval centers of excellence Chiprovtsi, Kratovo, Vratza, Sofia are allowed certain privileges. A lot of masterpieces for the church from this period have been preserved, the mastery of their make proving that the best traditions of Bulgarian medieval jewelry are still alive.

Under the oriental influence Bulgarian goldsmithing adopt some characteristic decorative elements such as the bent and pointed arch, the half-moon, the style “tulip”, eastern architectural silhouettes a.o.

After the renaissance the social and economic changes contribute to the improvement of the goldsmith’s trade. During the 19th century goldsmiths work in almost every town and even in some bigger villages. New centers of excellence come into existence: Vidin, Samokov, Panagyurishte, Karlovo, Plovdiv, Kotel, Sliven, Yambol, Prizren, Bitola, Skopje, Stit, Debar, Prilep, Ohrid, Carevo selo, Lozengrad a.o.

Gold and silver are the basic materials of the goldsmith’s trade. In the casting of objects with common purpose various alloys are used such as: bronze, brass a.o. Silver is most often smelted with copper.

Far more complicated instruments are used in goldsmithing in comparison to other metalworking crafts. Some of the tools have been made by the goldsmiths themselves.

The key techniques in traditional Bulgarian goldsmithing are casting, forging, hammering out, filigree and granulation. The works of the trade have been used for traditional satisfaction of the needs of people for ornaments, some household goods and domestic objects. Furthermore, goldsmiths create objects for religious use.

The multitude of traditional jewelry created by goldsmiths is huge.

Nadushni jewelry are some of the most widespread on the Bulgarian lands. During the Ottoman turks’ rule a wide variety of forms and applications come into existence. In northwestern Bulgaria are common the so called arpalii or tyrkolanki; in western Bulgaria the similar to bird claw pendants called nails; in Gabrovo region pendants called smocheta (grass-snakes). Over time most of the heavy and unpractical for wear jewelry lose ground to newer models, which are smaller and often created with the technique filigree.

Used for attaching wife’s kerchief and as an adornment for the head needles have also been common, called chomolushki (western Bulgaria), pribodki (Thrace), similar to stylized cockerel (Razgrad region), kureshnitsi (Rodopa region). Other variations of needles are trepki, tepelaci, kosichnitsi, which are made from movable interconnected tiles in a vertical line.