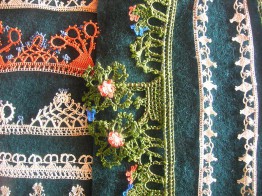 In its initial period the embroidery art evolves on the rich heritage of Slavic embroidery from 7th to the beginning of the 8th centuries.

Over time it acquires a distinctive aspect and entirely national character, the features of which have been preserved to our time. It portrays the creative spirit of the Bulgarian woman, expressed in collective and individual work, in quests, improvisations and reproduction.

During the period of Ottoman rule the Bulgarian woman does not cease creating and perseveres with highly artistic works featuring the Bulgarian folk embroidery. Gradually, embroidery becomes one of the most cherished fields of Bulgarian applied art. Through these works, the outcome of labor and patience, the Bulgarian woman conveys love for her home and the Bulgarian nature. She embroiders on domestic cloth such as hemp, linen, wool, cotton, and silk with all kinds of locally manufactured threads in a extensive range of colors, with golden and silver tinsel, with sequins and beads.

During the Renaissance the Bulgarian embroidery art continues the traditions of the past, while fervently keeping its folk character and spirit. During this period the basic materials for embroidery is domestic cloth. The clothes (pinafores, sleeveless dresses called litaks a.o. for the women; tight homespun breeches called benevrek, doublets for the men) are made of friezes for the majority of the population.

A variety of stitches are applied in the make of the Bulgarian folk embroidery.  The most suitable embroidery materials are linen, hemp, wool, cotton and staple fibre. They should be smoothly woven and unicoloured.

Embroidery occurs with or without canvas. In ancient times, when graph paper has been unknown, embroidery was applied directly on the materials – rougher cloth (hemp, linen, cotton a.o.) with clearly visible and countable threads. Nowadays embroidery without canvas occurs only on materials such as panama, or by use of the specific technique called “pisan okai”. With this technique it is worked on a delicate silk material, while the motif is applied on the cloth via indigo.

Depending on customs and the characteristics features of the national clothing of Bulgarians’ population two ethnographic areas can be defined – eastern and western.

The regions can be divided in accordance to the specifics and ornaments that are widely practiced in the embroidered works of a given region (vegetal and animal depictions, human figures, symbolic and geometric ornaments), and to the used techniques and prevalent colors.

A distinctive feature of our folk embroidery is its polychromy. The basic color in embroidery is red, which is characteristic of many regions. The remaining colors are additional, being mostly in warm tones.