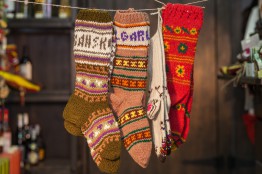 Artistic knitting is a traditional Bulgarian craft, including knitting on one and five hooks, point- and Brussels lace.

In the strict sense “knitting” is the intertwining of threads by forming stitches as basic constructive elements. In this way almost all types of knitting works for folk dresses are created, used mainly as fittings for putting on, covering the hands, decoration of clothing and fabrics for household organization and use.

The basic materials for knit-wears are threads of vegetal and animal origin. The traditional Bulgarian ones are primarily made of woolen cloth. Silk threads are needed for decoration. The cotton knit-wear is introduced only in more recent times. One of the oldest and often applied techniques is with one hook or needle in straight lines both ways along the entire length of the work. This way a figure with distinct density and decorative features is shaped. A nearly ubiquitous appeal bears the knitting with five hooks in circular lines, which provides an opportunity to create ornamentation in socks and bracelets through a dense net and uniform stitches, a process associated with ornamentation of embroideries and threads. The ornamentation, as seen in the socks from Samokov, Smolyan, Sofia, Kichevo, Vratza and the bracelets from Debyr and Smolyan, is created during the knitting, whereby stitches of various colors are put into the smooth surface, similar to the stitches in embroidery. It is a common knowledge that socks manufacture in some settlements (Koprivstitza) has exceeded the limits of demand for personal use and has been exported to the eastern markets.

With the advance of urban clothing during the Renaissance the colorful ornamentation of socks gradually diminishes and is substituted by a plastic one, derived from various dense and meshy lines. At the beginning of the 20th century variegated beads gain importance in knitting, with ornaments similar to embroidered with beads belts, pockets, dresses and other clothing.

The so called “keneta” (in Panagyurishte – bunches) also fall under knit-ware. They are small fringe-looking with a width of 2 to 5 cm., created with parti-colored silk and cotton threads and intended for adornment of the scarves’ edges, of pockets, sleeves and female shirts. Their motifs are usually aligned in a line along the length of the knit-ware. In the one- and parti-colored keneta the vegetal motifs are very common – rosettes, daisies, tulips, carnations, campanulas a.o. Woven or independently created are human and animal figures (doggies, burdies) and objects such as ibricheta, cups a.o. These knit-wares are developed mainly in the 9th century in Koprivshtitsa, Panagyurishte, and Samokov in accordance with patterns, carried over from urban culture in Turkey.